What's happening: A dramatic rise in GameStop's share price has caught the eyes of stock market watchers on a rapidly growing Reddit discussion board called Wallstreetbets. GameStop (GME) shares, a legacy company whose brick and mortar stores are often located in struggling malls, have climbed noticeably over the past few sessions as days traders push the stock with growing passion. The stock, which closed out 2020 at $18.84 per share, finished 29 Jan at $325, with multiple halted sessions in some days due to volatility. At one point, it climbed to nearly $414, a record high, according to Reddit Board.

GameStop, which is likely to lose money this year ahead and next, has more than quadrupled its value in a month because it's effectively become a meme stock. Since the beginning of 2020, it has skyrocketed more than 1,100%, even outpacing Tesla's gains. Shares are up for another 20% in premarket trading.

On Thursday, the GameStop stock lost more than 44% of its value after rising around 40% at a point earlier in the day.

After an outcry of people, Robinhood agreed to resume the GameStop trade on Friday.

Adding surprise to the drama?

With Wall Street in panic mode, several stockbrokers, including Robinhood, imposed restrictions on trading in the red hot stock, as well as several others saying they will continue monitoring the stock market situation and may make required adjustments. Robinhood was doing so for GME, BlackBerry (BB), Nokia (NOK), AMC (AMC), Bed Bath & Beyond (BBBY),  and other stocks and added that they would help customers to stay well informed.

They further added that GameStop and other volatile companies' stock trade would reopen after restricting customers' ability to purchase securities.

Robinhood got swift backlash for implementing the trade restriction. Accordingly, a few other platforms took action setting off allegations of "market manipulation" for Wall Street. As they raged online, they filed a legal claim against Robinhood in New York on Thursday. Therefore, hours after applying the restrictions, Robinhood said it would reopen limited buys for those securities in a responsible manner from Friday, which surged in 100% gain in GameStop shares in premarket trading as of 4 a.m. EST.

On Thursday, the shares of GameStop (GME) dipped down more than 60% at one point and were frozen several times, after rising rocket-high in recent weeks since the support from individual investors on Reddit. The stock remained flat for about ten minutes after the market opened.

Two other exchange-traded funds with significant positions in GameStop dipped down on Thursday too. The SPDR S&P Retail ETF (XRT) and Wedbush ETFMG Video Game Tech ETF (GAMR) both fell about 10%, but both are still more than 25% up so far this year. 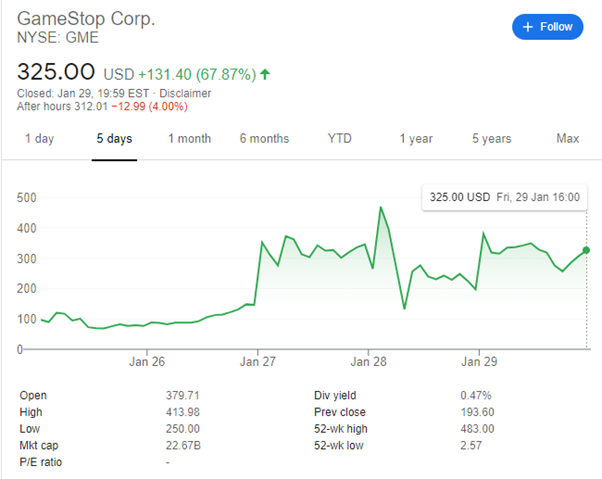 Despite the losses due to trade restriction on Thursday, GameStop shares are still high, around 950% in 2021 – flying up from just under $20 at the end of 2020 to a current market price of about $325 as per 29 Jan closing statistics.

It's mainly because of an army of investors buying the stock to hit the hedge funds that have played against GameStop.

This phenomenon is called a short squeeze, where an investor who believes a stock will fall borrows those shares and sells them, with an anticipation of buying them back at a lower price, making the profit (the difference) before paying back the loan.

But the scenario can go worse for a short seller if the share stock he borrowed keeps climbing. This market trend will make him suffer the losses (in theory, these losses are infinite). So that creates another buying rage as short-seller rushes to buy back the share stock before it moves even higher and costs him a bigger loss.

Investors argued on social media debate in favor of GameStop, saying the company share had been seriously undervalued. The company's total sales dropped around 3% due to temporary store closure, and fewer customers visited during the holiday season, of course just because of the Covid-19 pandemic. However, the company's online sales grew by about one-third of total sales. The supporters were cheered earlier this month for adding Chewy founder "Ryan Cohen" by the company, which has been making a digital overhaul, to its board, which is another factor playing a positive role in making GameStop worth better.

The gaming company is going to over the game of its 74 physical stores instead of working to open online stores and build up its all operations online. Now, the focus is on the right momentum, as small investors hope the surge-hype can help the stock continue rising.

However, it's clear that the epic has developed into much more than an argument over the video game retailer’s future or the advantages of different trading approaches. As online brokers like Robinhood democratize access to financial markets, some are thinking of it as a generational fight between the new and old guard of the investing world.

Being a seller – The lesson to learn from GameStop’s massive stock surge!

We are not here to suggest or discourage our readers from investing in the GameStop and alike stocks. However, what else are the reasons behind this trending stock hype, whether it’s the squeeze short or business strategies shift towards the digitalization model, one thing is pretty sure that if a company wants to excel in its business, embracing advanced technology is a must. The business still relying on physical store sales are observing a prominent drop in their sales.

SroresGo marketplace is one of today's best eCommerce markets and the future, where the small businesses can list their products and services to expand their business operations and sell to countless online buyers. Taking the right opportunity at the right time can definitely quadruple any business so is the shifting towards an innovative digital business model today.

Being in prolonged confinement, having more time to spend 'family-time,' people are making that time more fun playing video games at home with their kids, adult family members, and friends. According to a 2020 survey, 38% of video game players fall in the 18-34 years age slab, and 21% are under 18 years. The sellers have a greater opportunity to sell the gaming gadgets online to fulfill the demand and earn profits.

And the game lovers looking for amazing gadgets for their comfortable gaming sessions can find the best classic games, gaming keyboards, multi-function remote controls, headphones, and much more on SroresGo at very affordable prices.

Search
Categories
Back to top
Sell On StoresGo
Advertise